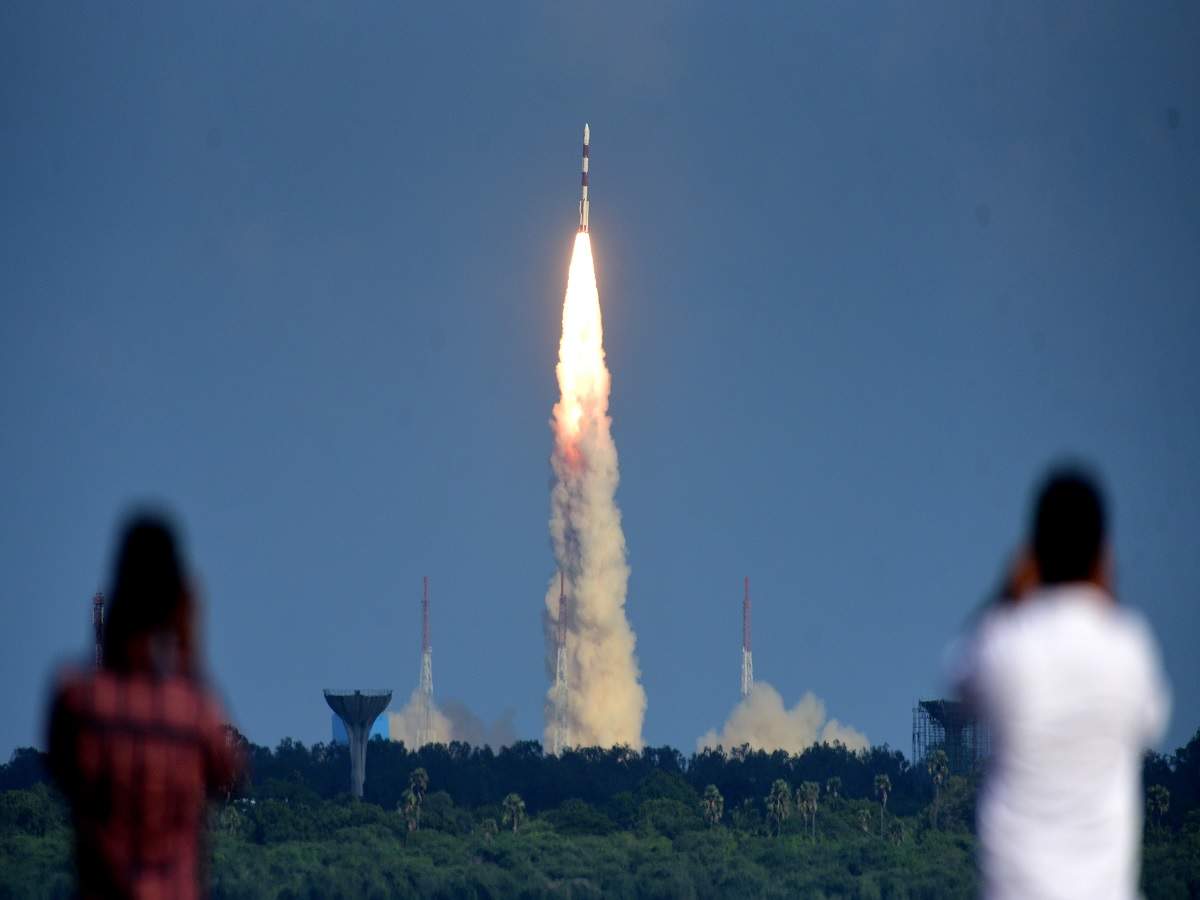 PSLV-C51 carrying Amazonia-1, an optical earth observation satellite from Brazil, and 18 other satellites lifted off from the first launch pad at Satish Dhawan Space Centre in Sriharikota at 10.24am.

U Tejonmayam | TNN | Updated: Feb 28, 2021, 14:19 IST
PSLV
CHENNAI: The Indian Space Research Organisation opened its space calendar 2021 with the successful launch of PSLV-C51 carrying Amazonia-1 and 18 other satellites on Sunday.
PSLV-C51 carrying Amazonia-1, an optical earth observation satellite from Brazil, and 18 other satellites lifted off from the first launch pad at Satish Dhawan Space Centre in Sriharikota at 10.24am.
Around 17 minutes after lift-off and one minute after the PS4 engine cut-off, PSLV placed its primary payload -- 637kg weighing Amazonia-1 – in a sun synchronous polar orbit.

After placing Amazonia-1 in the orbit, the rocket coasted for 54 minutes before the first restart of the upper stage engine and cut-off in nine seconds. The second coasting phase lasted 48 minutes before the second restart for eight seconds PS4 and cut-off.
Around one minute later, PSLV started placing the first of the remaining 18 satellites. In the next four minutes, the rocket placed all the satellites in orbits. The rocket’s journey lasted around two hours.
1/12

Show Captions
The 18 other satellites in the mission included Satish Dhawan SAT (SDSAT) built by Space Kidz India and UNITYsat, a combination of three satellites, designed and built by three colleges -- Sri Shakthi Institute of Engineering and Technology in Coimbatore, JPR Institute of Technology in Sriperumbudur and GH Raisoni College of Engineering in Nagpur.
The other satellites were: SindhuNetra, an Indian technology demonstration satellite, SAI-1 NanoConnect-2, a technology demonstration satellite from the US, and 12 SpaceBEEs satellites for two-way satellite communications and data relay.
“India and Isro feel extremely proud and honoured to launch Amazonia-1, the first satellite to be designed, integrated and operated by National Institute for Space Research, Brazil. The satellite is in good health and the solar panels have been deployed,” said Isro chairman K Sivan after PSLV placed Amazonia-1 in orbit.
"We have planned 14 missions this year including seven launch missions, six satellite missions and the first unmanned mission by the end of this year," he said.

PSLVC51 lifts off successfully from Satish Dhawan Space Centre, Sriharikota
Marcos Cesar Pontes, Brazil’s minister of science, technology and innovation who was present to witness the launch, said the satellite was the result of years of efforts by engineers at the National Institute for Space Research and the Brazilian Space Agency.
“The launch represents a new era for Brazil satellite industry and development. This satellite has a very important mission for Brazil. It will monitor the country and the Amazon. It represents a new era of the Brazil satellite industry and development. This is one important step in the partnership between Brazil and India that is going to grow up. We are going to work together a lot. It is the beginning of our strong relationship,” he said.
Isro PSLV-C51 mission: Live updates
The launch was the 53rd flight of PSLV and the 78th launch vehicle mission from Sriharikota spaceport. PSLV-C51 was also the third flight using the ‘DL’ variant, which means the rocket was equipped with two solid strap-on boosters.
PSLV-C51/Amazonia-1 mission was the first dedicated PSLV commercial mission for NewSpace India Limited (NSIL), a government of India company under the department of space.
Isro said NSIL undertook the mission under a commercial arrangement with Spaceflight Inc, US. With this mission, Isro has launched 342 foreign satellites from 34 countries.
In Video:Watch: ISRO's PSLV-C51 carrying 19 satellites lifts off from Sriharikota
more from times of india news
Coronavirus NewsUS Presidential ElectionUS NewsPakistan NewsDonald TrumpChina NewsSouth Asia NewsWorld NewsNarendra Modi